REPRESENTATIONS OF VIOLENCE: ART ABOUT THE SIERRA LEONEAN CIVIL WAR is an exhibition of civil war through the eyes of Artists. 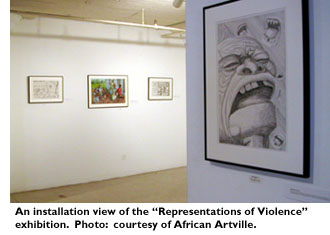 In 2003, Twenty-First Century African Youth Movement (AYM) developed a traveling art exhibition titled, Representations of Violence: Art about the Sierra Leone Civil War. The event started with an associated conference at the Memorial Union Play Circle. The meeting took place on Friday, February 28 and Saturday, March 1, 2003. The exhibition premiered at the Porter Butts Gallery in the University of Wisconsin Memorial Union from March 1st – 30th, 2003. The conference placed the show in its appropriate historical and social context. It also expanded upon ideas and issues raised in the content of the works.

Representations of Violence: Art about the Sierra Leone Civil War provides visual images of the experiences of thousands of Sierra Leoneans who were profoundly affected by the decade-long civil crisis in their country.

The exhibition also took place at the following locations:

According to University of Wisconsin – Madison Professor, Aliko Songolo, “The role of Art is to bear witness and speak the unspeakable.” This exhibition is all about bearing witness and recording for posterity a story that would be difficult to forget.

The people of Sierra Leone continue struggling to build sustainable peace and heal. The same political and economic realities that preceded the decade-long civil war have unfortunately resurfaced – with absolute disregard on our contemporary historical experience.

During and after the war, the people have come to rely on the inspiration of their artistic community to chronicle the national history and communicate their stories.

The book captured the excitement of the masses during those uncertain years. The book is a witness to a spontaneous outburst of creativity that was ushered in by the 1992 military coup. Musicians, poets, theater groups and painters experienced a cultural renaissance. Art and music thus became dominant media of social commentary that inspired responses to the war. 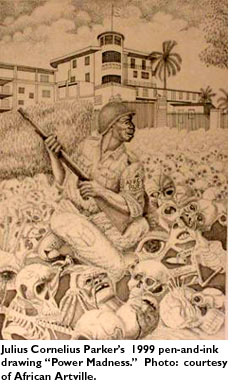 The art we have collected and curated under this exhibition comes out of this body of expression. The Sierra Leone civil war lasted for eleven years. These paintings and drawings tell gruesome narratives that many of the artists themselves witnessed. Others portray infamous events or people such as “Massive Killer” or “Brigadier Cut-Hand” that became a part of the cultural lore.

A significant aspect of AYM endeavors involves utilizing the arts to depict, discuss, and define the trauma experienced in war-torn African societies. The goal of the art is to initiate mechanisms of reconciliation and ways to achieve violence prevention.

It was the inspiration from African and European artists of conscience like Malangatana, Goya, Picasso and Bosch that AYM staged “Representations of Violence: Art about the Sierra Leone Civil War.” The art derived from this endeavor depicts the ravages of war, serving as both a catharsis of trauma and a catalyst for conflict resolution.

The exhibition also engages the world’s collective memory, placing the tragedy of the Sierra Leone Civil War in the context of wars in modern history, from Napoleon’s invasion of Spain, through World War II to Vietnam, on up to the present in Syria, Liberia, Iraq, Somalia, Sudan and Libya.

AYM’s exhibition aimed to educate African and Western audiences of a shared experience and responsibility, building a bridge from disinterest to involvement.

This exhibition comes with a catalog and conference proceedings that highlight the despicable agony the people of Sierra Leone endured during eleven years of civil war. It includes 41 color reproductions of the art that appeared in the exhibition of the same name as well as scholarly work addressing issues of violence and creativity in the Sierra Leone civil war by notable scholars from Europe, Africa, and the United States.

Representations of Violence Art about the Sierra Leone Civil War catalog is a must have for Sierra Leoneans and friends of Sierra Leone.  It is also a reference work for humanitarian workers, human rights advocates, art historians, artists, art lovers, Africanists or anyone curious about matters relating to international relations and the role of politics in creating conflicts in Africa and beyond.

From its earlier days, the mission of AYM has evolved to become a social enterprise, bringing people and resources together to reverse the social and economic marginalization of rural communities in Africa through youth mobilization.

Today, AYM aspires to that mission by empowering and mobilizing Africa’s youth through employment in technology, agriculture, education, ecotourism, entrepreneurship, and the arts.

With a determination to create sustainable peace, the AYM’s self-mandate is to tackle Sierra Leone’s post-civil war youth unemployment challenges by developing the talent and skills of 14-35-year-olds as channels of self-sufficiency, economic stability, community prosperity and social progress.

AYM plans to expand its country-level support to Liberia, Ghana, and the Gambia as resources become available.

With Representations of Violence: Art about the Sierra Leone Civil War, the AYM mission will be accomplished by giving accounts of the violence during the eleven-year civil war, 1991 – 2002.

This exhibition will provide a mechanism through which human rights leaders and victims of the civil war will continue to speak out.  The work itself serves as witness to a horrible contemporary historical event; the enduring story will go far and wide.

The exhibition will expose people to the events that make the Sierra Leone civil war.

The exhibition will also introduce the Sierra Leonean artists that created the works to a broader audience.

Decisions that affect Sierra Leone are being made every day by major world powers and institutions such as the World Bank and the United Nations.

The opinions of citizens profoundly influenced the decisions of these institutions. Because these works bear universal experiences, they are no longer limited to a particular audience.

With this exhibition and its social media outreaches, AYM hopes to reach a broader global audience on behalf of Sierra Leone.

What the world knows of the horrific war in Sierra Leone is that thousands of people lost limbs, loved ones, and lives. In fact, more than 70,000 Sierra Leoneans perished. During that period, the Capital City, Freetown, was ransacked three times since 1996.

Thousands of Sierra Leoneans fled out of the country as refugees. Many of them went to North America (the USA and Canada), Europe and Australia.

Others found refuge in neighboring African countries.  But in spite of the cable news specials and graphic reporting in newspapers around the world such as the Washington Post, New York Times and other news media, the International community was very slow to act, even with tales of senseless brutalities.

AYM believes that the people of Sierra Leone, through whatever channel, in whatever period, must tell their own stories. With this exhibition and its continued social media outreach, the international community will fully come to understand the gravity and scope of the Sierra Leone civil war.

In short, this exhibition will be a premier forum for Sierra Leonean artists to tell their stories. Likewise, it will be an opportunity to invite the world to the enduring realities of the Sierra Leone civil war and recognize the decade-long experiences of the people of Sierra Leone.

What happened in Sierra Leone can happen anywhere. One needs to turn on the news and see what is happening today in places like Libya, South Sudan, and Iraq.

The pages of history litter with gruesome atrocities of war. In recent history, we can think of the Holocaust, Spanish civil war, Vietnam, Yugoslavia, Angola, Chechnya, Palestine, Rwanda, South Africa, Mozambique, Ethiopia, Somalia, and Liberia and Syria. The list is endless.

As an organization, AYM feels it is our responsibility to provide a framework that would enable the viewer to recognize the complexities of such tragedies.

Our goal is to share knowledge that may contribute to understanding the dynamics of these global horrors and, hopefully, provide to the narrative that would spin the wheels to steer toward a worldwide culture of peace.

Our focus is to educate the viewer about the particulars of the Sierra Leone Crisis so that they may share in our concern for the future of the survivors of violence.

After we had previewed the works of this exhibition, we invited local scholars and activists to discuss them and share their opinions. From the discussion, we devoted ample attention to the proper contextualization of this exhibition.

The themes depicted in the narrative style work of the Sierra Leone artists conjure intense emotional responses. Throughout the process, we received extensive support for our endeavors and the audience participation at each exhibition venue was very encouraging.

From the start, we were keenly aware of our responsibility to contain the power of these works in a vessel strong enough to support their content.

The exhibition enhanced humanitarian understanding without obscuring the global forces that affect the crisis. Through the associated conference, the exhibition catalog, informative panels, video, and outreach events, we provided connections for the viewer so that the intricacies of the war will be understood.

In collaboration with the Wisconsin Union Directorate Art Committee, the exhibition was well presented. The committee oversaw the design and presentation of the show.

A dividing wall displaying one of the less graphic examples of art and an introductory panel greeted patrons and viewers. From the doorway of the gallery, this structure served to visually retain the gaze of the gallery visitor until that individual has had the chance to make a conscious decision to enter the exhibition.

At the doorway were prominent signs alerting visitors to the violent and explicit nature of the work. During open hours, with the help of volunteers from the Wisconsin Union Art Committee, we continually staff the gallery with fully educated docents.

The guides were available to field questions and respond to the concerns and comments of the viewers. 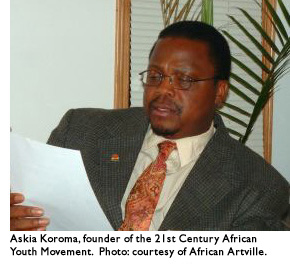 Due to lack of durable art materials in Sierra Leone during the production of the works, many prolific artists lacked the resources to produce their artwork on quality materials. Most of the pieces we acquired were in sensitive conditions.

However, we contracted with Doug Fath, a specialist whose knowledge and experience in the registrar’s department of the Madison Art Center in Wisconsin assured us that he would treat the works with the utmost care.

Each work is now preserved and displayed with museum-quality matting and framing for future transfer to Sierra Leone.

We held a two-day conference in collaboration with the African Studies Program at the University of Wisconsin. Panel discussions focused on topics such as sexual violence, child combatants, civilians, counterinsurgency militias, mob violence, trauma and memory, art and music.

The conference was open to the public, and we extended exclusive invitations to community leaders. Then Senator Feingold of Wisconsin, delivered the keynote address.

“One of the most important keys to success is having the discipline to do what you know you should do, even when you don’t feel like doing it.”
— Unknown
“The handicap of deafness is not in the ear; it is in the mind.”
— Marlee Matlin
“It is in moments of decision that your destiny is shaped.”
— Tony Robbins
“The best way to predict the future is to create it.”
— Abraham Lincoln
“Don’t be afraid to stand for what you believe in, even if it means standing alone.”
— Andy Biersack
“Just remember there is someone out there that is more than happy with less than what you have.”
— Unknown
“I hated every minute of training, but I said, ‘Don’t quit. Suffer now and live the rest of your life as a champion.”
— Muhammad Ali
“Believe you can and you’re halfway there.”
— Theodore Roosevelt
“Someone is sitting in the shade today because someone planted a tree a long time ago.”
— Warren Buffet
“Learn to appreciate what you have before time makes you appreciate what you had.”
— Unknown